The International Criminal Court and the Right to Interim Release eBook 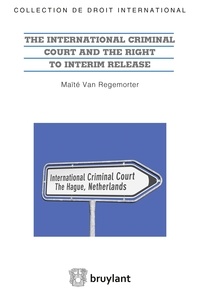 Does a person accused of genocide, crimes against humanity or war crimes before the International Criminal Court (ICC) enjoy the same human rights as a person accused of the same crimes before a national jurisdiction ? In other words, to what extent does the ICC have an obligation to respect human rights of a suspect or accused person and, if so, can it do so ? The purpose of this book is precisely to answer this question by focusing on the right to interim release of an accused. It seeks to draw attention to this issue and improve the practice of the ICC by presenting a clear legal argument from which key actors, such as defense lawyers, can draw from to enforce their clients' right to freedom. To this end, it identifies the basis of the ICC's legal obligation and defines the right to provisional release pending trial. On the basis of this definition, the compliance by the ICC with this obligation is analyzed. Like other authors who examined the question of the applicability of human rights to the ICC, the author of this book considers that the particular context in which the ICC acts must be taken into account when assessing its ability to respect human rights. However, unlike such authors, this book demonstrates that, regarding the right to interim release, this particular context is not necessarily an obstacle that defense lawyers must uncritically accept. The practice of the International Criminal Tribunal for the former Yugoslavia (ICTY) offers multiple examples of successful provisional releases in cases where a State agrees to offer guarantees for the reception of an accused in its territory. This book therefore argues for the obligation of the ICC to obtain such guarantees and outlines the remedies available to an accused in case of inaction by the ICC and lack of good will of its State parties, including recourse to the European Court of Human Rights.

THE HAGUE: International Criminal Court judges have ordered the interim release of former Congolese Vice President Jean-Pierre Bemba, days after he was acquitted on appeal of war crimes and crimes ...

The Court declared inadmissible the application in the case of Beshiri v. Albania and 11 similar applications concerning the prolonged failure to enforce final decisions recognising a right to compensation in respect of property expropriated during the communist era.. The Court considered that the 2015 Property Act passed in Albania in the wake of the pilot judgment in Manushaqe Puto and Others v.